There are two types of people in the world. The optimist who thinks that a 1 in 2500 stat means you did something amazing. On the other hand, there is the pessimist who sees this stat as a bad omen. But what happens when bad stats happen to the optimist? Talk about a whirl wind of emotions.

I am that stat. I’ve always been the “1 in a million” side effect person. If it has a side effect, I’ll probably contact at least one of the more serious ones. Before I get into the beef of my story/message, here is a little back story. (Stick with me, this is a long one!)
When I was in 4th grade I started getting TERRIBLE acne. I mean, it was pretty bad! Nothing ever worked, I started seeing a dermatologist and went to her for the next 5 years. I tried basically everything. Topical medications could only fix some of my acne issue, it was way deeper than that. Long story short I eventually was put on a medication that was very strong, but the only side effect was dark, spotty pigmentation on your skin. They were sure this would hit the spot because that side effect was so rare they have never even come across it at my hospital (Geisinger). ONE in a MILLION were the odds for this side effect to occur. Well, a few months later I was in their media studio getting pictures taken of my forehead for dark, spotty pigmentation.
At that point in my life, I honestly didn’t think much of it. I was a great sport about it, hey, dark spots were way better than tons of massive pimples on my face! But I guess what I am trying to get at is, I am that 1 in a million, optimistic person that the odds are never in my favor.
Recently (as of a year ago) I got married. My husband and I knew that basically the day of the wedding we wanted to start and try for a family, we weren’t in a total rush, but we didn’t see the point in waiting either. It would happen when it happens. Six months later, it did!!
It is so important to me to take care of my body. I know how important exercise and healthy eating is, and I was determined to have a healthy pregnancy. And I do. When it comes to baby, he or she is perfectly healthy, and I am also doing fine. However, my placenta decided to be my pregnancy side effect. (not so much a “side effect” but a condition, maybe)
Don’t get me wrong, we are 200% aware that this one of the LEAST things to “make a big deal” over when it comes to pregnancy, birth, and infants. However, it is still a matter that cannot be over looked, because honestly it could be deadly if gone undiagnosed. If we were to pick a “complication” or a road block, this would probably be it.
Pregnancy is a feeling like no other. Everyone experiences it a little differently, and each day is a completely new adventure; all starting from day one. You are over joyed, you are scared, you are nervous, you can’t believe something is growing inside of you. You take your vitamins, go for walks, and eat balanced meals. You are on the track to greatness with this little bean floating around inside of you.
I really did feel like I was doing everything right, and I was, so what could possibly go wrong?! 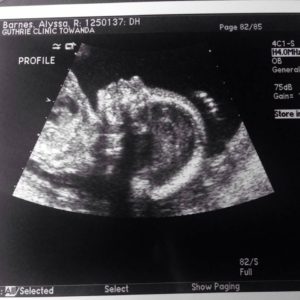 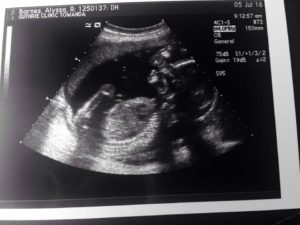 At our second ultra sound at about 19 weeks (pictured above!) our ultra sound tech seemed a little concerned because it looked like my placenta was not only very low and close to my cervix, but that it might have an extra lobe on it. Not seeming too concerned, or else she had an amazing poker face, we left and waited until our next appointment to hear the results. (Which was the next day).
Our midwife seemed hesitant but ordered another ultra sound via the radiologist’s request. We went back for another around week 24 (pictured below!) and got a normal and a transvaginal ultrasound (the one they look from the inside). She was able to see a little better, to see what exactly was going on. 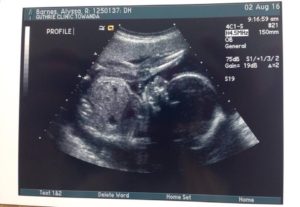 Still being optimistic, I knew that I have done everything I could to create a healthy and proper living environment for this baby. Sure I ate more carbs than normal, and took a few weeks off exercising when energy just wasn’t there. Overall though, I was doing a great job at being pregnant. So why would something go wrong? People drink, smoke and do drugs their whole pregnancy and have perfectly healthy pregnancies and deliveries.
Okay, so we were supposed to have an appointment with our midwife to go over ultra sound #3 results, but we got there and it was canceled. We were a little disappointed because we wanted to know the official results, but we rescheduled for the following Friday, since that was the first open appointment. Meanwhile, that week went on by, so did the weekend. Monday morning I get a phone call from one of the midwives. She was very calm (same one that almost didn’t give us the third ultrasound) and was pretty unclear and didn’t make it seem like the findings were anything to worry about, but they would refer to me to a specialist to confirm it.
Let me just say, that was a painful week waiting to get to the midwife appointment to really dig deep and go over our results. We were aware that it was possible that I had partial placenta previa, a condition that affects 1 in 200 pregnant women, a condition where the placenta is partially covering part of the cervix (all in all, short and sweet), we knew that there was a change this would move up with the uterus and out of the way… which happens in most cases leaving only 10% where it will be a complication for birth. We also knew that there was a chance that my placenta had an additional lobe to it. Nothing was confirmed of course, this is just what we got out of the ultra sound tech during the appointment.
>>more on placenta previa here.
Okay, back to the midwife appointment with the results! I am a little annoyed because the phone call we initially received made it seem like this was still not confirmed if it was an issue or not, however in the report, it clearly states that VASA PREVIA is current and present. Basically, from my understanding ( I will find out more at my specialist appointment tomorrow) my placenta is not only laying low, but it has a second lobe to it, called succenturiate placenta. However, this lobe has its own blood supply, and that blood supply looks like it is crossing my cervix. — not good.
UGH, what? More terms that we are scratching our heads over. The midwife seemed a little more alarmed over the report, but she did stay very calm and basically just asked if we have any questions, but that we would be going to a specialist to get another ultra sound on a better machine, and see what the specialist has to say. Of course we didn’t freak out right away, because the midwife wasn’t. When we got home and started looking these terms up, that is when the panic started to settle in.
(it has been almost impossible to find an image of what I think is going on inside of me. This is the best I could find that describes a placenta with a succenturiate placenta and vasa previa.) 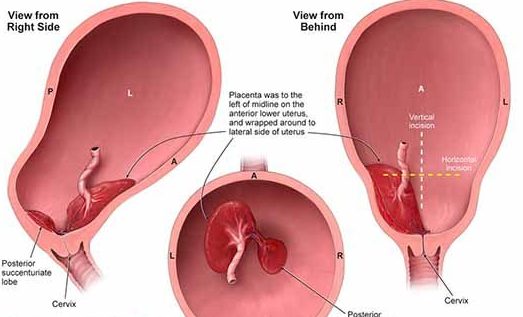 Again, I didn’t do anything wrong for this to happen. It is very uncommon, they say and occurs in 1:2500-3000 pregnancies (I am not 100% sure if that is the rate for when they DO find it, or for both diagnosed and undiagnosed). I am VERY lucky it is being looked into because there is NOT much awareness for it, and many doctors don’t know what to do with the situation since it is so uncommon. Going undiagnosed there is a 95% fetal mortality rate, but the chances go up significantly, and are very low when it is found prenatally.
So what does all this mean? It is found, it was detected, so now what!? First off I HAVE to have a c-section. Basically no if-ands-or-buts about it. Normally doctors will put women on bed rest or hospitalized bed rest anywhere from 28 weeks to 33 weeks is most common leading up until a scheduled c-section around 35-36 weeks. Each case is different, each doctor has a different opinion. The one thing that is known across the boards, you CANNOT start to go into labor, if you do, you have moments to get to a hospital and get that baby out. Once you start to dilate, you could rupture that blood supply.
It also means total pelvic rest. Which means no sexual intercourse, no vaginal exams, and no transvaginal ultra sounds (but this one has been proven to be safe, so depending on the doctor it may be allowed).
Of course all of this could just be our doctors being super cautious, and triple checking everything, but they are pretty positive they see it on a regular ultra sound, so I highly doubt it will not be there on a 3D ultra sound. We are keeping our heads held high, trying to be optimistic about the research we absorb, and just taking it day by day. I will try to do another update after my appointment when I get some questions answered!